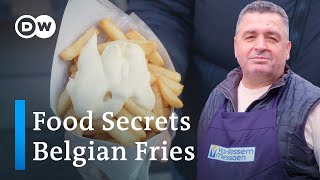 An Albanian from Kosovo has been feeding the Belgians with the famous Belgian chips for years. For the Belgians, chips are sacred, something you should not mess with.

You may be wondering: what can go wrong when potatoes are fried? Enough stuff.

First: do not call it "French Fries", at least not when you are in Belgium. Then, there is the proper potato variety and the special secret you need to fry potatoes. Not to forget the special method of cooking by frying them twice and different sauces to choose from. So even if the chips seem to be a simple dish at first glance, there are still some secrets to discover.

Kemal Vuciterna, who runs one of the oldest chips stores in the capital Brussels for 33 years, told us that the secret of good chips lies in the type of potato, oil, and cooking technique. His shop "Friture Pitta de la Chapelle" is located near the historic Notre Dame Church in the tourist area of Brussels Sablon. Born in the city of Prizren, he lived in Kosovo until the age of 15, then in 1980 emigrated to Brussels, where his story began at the potato shop, which his uncle had opened 47 years ago.

“I finished primary school in Kosovo. I learned Turkish. Then at the age of 15, I came here to my uncle. When I came here, my uncle was working with a Greek man. Here I learned for three years. Then I started working. When I had no school work, I came here to work. My story started here. I do not know anything else," he said.

The secret of the best chips in Brussels

Kemal Vuciterna gave us the recipe on how to make delicious chips that look simple. He stressed the importance of the type of potato, the oil used, and the cooking technique for good chips, pointing out why Belgian chips are famous: “First, the type of potato. This is called Bintje. It is the best potato to make chips. It is cultivated here. It is also cultivated in the Netherlands, Luxembourg. The best chips are made from these. We use corn oil. Potatoes do well with it. Sometimes when I prepare them I add olive oil, add from the one with quality. It gives it a spicy taste.”

After the type of potato and the oil used, Vuciterna also talked about the frying technique. He said he uses fresh potatoes, not frozen ones. "The potatoes are fried twice. The first time we fry it a little. It becomes semi-ripe. At first, blush softens. We take it out after it is half-fried at 125 degrees. Once we get them to rest. When customers come, we throw away one or two packages. Then the heat is greater. It can be from 170 to 173 degrees," said Vuciterna.

For a good potato, according to him, it is also important the way the potato is cut and how many millimeters thick it should be.

-"It should be 12 millimeters thick. Once fried, when served to customers, 7-10 minutes remain hot. The outside becomes crunchy, the inside soft. Enjoy the potatoes ", said Vuciterna.

Kemal works 12 hours every day, while he spends his summer holidays in Kosovo. He does not want to sever ties with Kosovo where his brothers live, and also wants to protect the language and culture. Although he has never lived in Turkey, he speaks Turkish well.

-"In our family we speak both Albanian and Turkish.", he says.

After retiring, he plans to move to Kosovo.

-"All my life I have worked to make a small house so that my children can move there as well. I miss my country very much. I love my homeland very much, " stressed Vuciterna.

In the video below, among others, you can follow Sadife and Kemal Vuciterna in their shop 'Friture de la Chapelle Belgian' in Brussels, Belgium.