The matchmaking app dua.com is further expanding its vision for connecting international migrants, expats, and diaspora communities. It has acquired the German dating app ‘Spotted.de’, and combined the platforms – dua.com and Spotted.de – have over 5 million registered users.

Connecting members of any community based on common values, origin, or language – is dua.com’s mission. The platform enables people to connect and create all kinds of relationships: dating, friendship, and business connections.

Headquartered in Zurich (CH), dua.com initiated its operations in late 2019. It started by reconnecting Albanians, its first globally fragmented community with a large diaspora.

Equipped with the proof of concept and diverse revenue streams, dua.com embarked on a global journey by scaling its current solution in large communities in Western Europe.

To facilitate the global vision, the company acquired Spotted.de, a location-sensitive social dating app in the serendipitous connection space that has attracted users in German and French-speaking countries. Spotted raised $15.3 million in Seed and Series A funding up to date.

As per Valon Asani, dua.com’s CEO, the joint synergy between dua.com and Spotted will enable the company to gain the technical and business advantage from Spotted along with its user base, thus increasing the overall revenues and setting base in the DACH market.

“DUA addresses a fundamental but yet unmet need for many globally dispersed communities. These international Migrant Communities are fragmented and disconnected. Our mission is to reconnect them, wherever they are. From anywhere to everywhere, respectively, from hyper-local (Spotted) to super global (dua.com).” – Valon Asani, CEO dua.com

“We are very happy to join forces with the competent team of dua AG and Valon to take the app to the next level and bring even more people together, in perfect keeping with the Spotted philosophy of ‘share the love’.” – Nik Myftari – Founder Spotted.de

What sets dua.com apart from the competition is its exclusivity and mission to transform and connect communities as a whole. People connect based on shared needs and values, and so dua.com attracts confident men and women who celebrate their uniqueness, their culture, their values, their language, and their roots!

Women and men who join dua.com are not afraid to stand for something, stand out from the crowd, and celebrate their exotic differences.

Given an Albanian single living in Germany using any of the mainstream dating apps – interested in a serious relationship with other singles of his/her origin who share the same values and speak the same language, results with a probability of 0.6% or 1:166 for finding another Albanian on such existing dating apps in Germany. In the US it would be even 1:660 or 0.1%.

On dua it’s 100%. Because dua.com is community-first. Whatever values connect a community, dua reconnects those people with each other.

Within a span of two years, the dua.com app has been downloaded and installed on iOS or Android devices over 1.4 Million times, reaching a total of over 100 million message exchanges, and over 3 billion user interactions. Thus becoming the fastest-growing matchmaking provider in Albanian-speaking countries. In Q4/2022 dua.com is expanding its community-first approach to many other globally fragmented communities.

In terms of investments, the company completed Seed and Series A rounds, raising a total of $4.9 million. To achieve such an objective, well-known Swiss Entrepreneurs, Venture Capitalists, and Angel Investors have invested in dua.com and provided strategic advice in their respective areas of expertise.

Given its successful trajectory, the company was featured in numerous well-renowned publications, including Forbes. 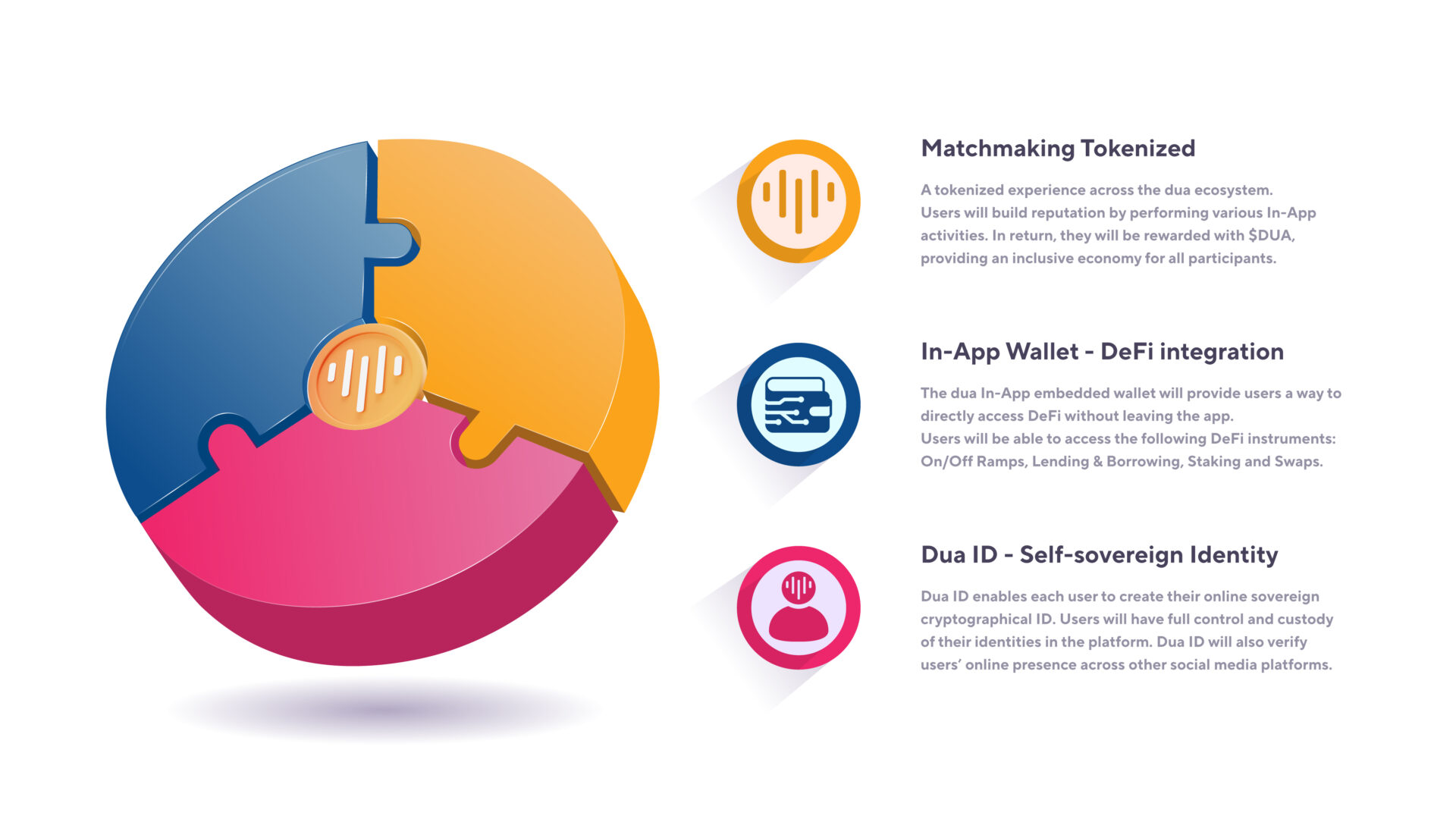 The dua.com team has entered a long-term partnership with AllianceBlock, who seamlessly brings DeFi and TradFi together. The latter provides a decentralized infrastructure allowing traditional and blockchain-based projects to come into existence via peer-to-peer decentralized community crowdfunding.

With the assistance of the DeFi infrastructure layer of AllianceBlock, dua.com is aiming to enable millions of financially underserved people access to the benefits of DeFi. On top of that, the company is aiming to build a matchmaking rewarding system based on user reputation and contribution and a self-sovereign identity solution for millions of users across web3.